I attended the Women’s March in New York City yesterday to protest against the hateful rhetoric directed towards the most disenfranchised groups of people in the American society, which was propelled into the public’s sphere by the one and only Donald Trump.

“Why?”, my mom exclaimed, struggling to grasp my recent political outbursts, “You’re not gonna change anything”. She is sharing the sentiment with my not-so-liberal friends, who are on the verge of extinction in my social circle due to my radical ideological departure.

“You’re not gonna change anything”. Well, I have changed. Good luck arguing with me over that and I’m sure millions of people who went on the streets yesterday were no longer the same either.  Yes, Trump is still the POTUS, his Cabinet still sucks; but this notion that a protest is only effective and worth carrying out only if it manages to dismantle the system is not only naive but also extremely myopic and short-sighted.

I am tired of people thinking of the institution or the system as this abstract entity that they are not a part of, so if it got f**ked over they can just point fingers and be magically immune to blame. hmm… Truth of the day: you are part of that system. Actually, you are the system. I am the system. Together we build the system. So to change it, then, you and I will have to look into the mirror first to rigorously examine what we have (not) done and how we are complicit in creating the world that we detest so much.

The Women’s March yesterday did just that. One young woman next to me actually carried a mirror with her, which immediately let loose a visceral stream of energy going down my spine. I was struck. It is an ideological war. I realized. A war that is not only us against them, but also us against ourselves. It is a wake up call for actions – a collective awakening of consciousness perhaps. There is no time for complacency. We must look around to see what different people are fighting for: to take in the multiplicities of experiences, to see the world that is bigger than ourselves, and to fundamentally question our value system. Then, only then, could we wage a war against them. 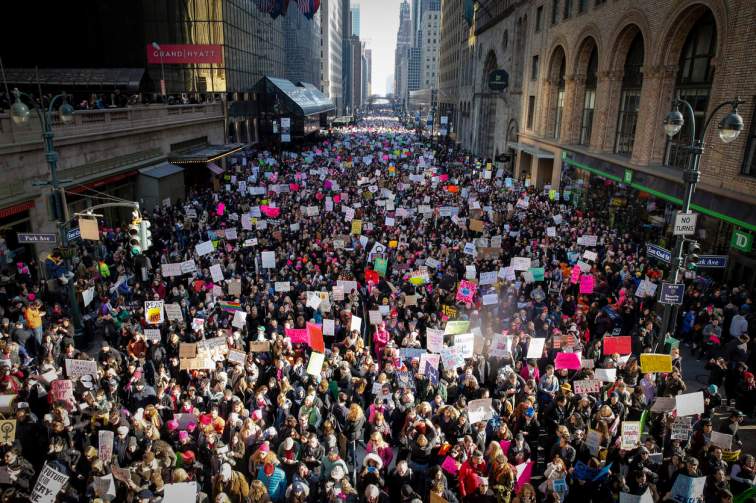 Fortunately, or perhaps unfortunately (?!!?), violence did not break out during the few hours in the place that I was marching. But it did break out elsewhere, albeit sporadically – the highlight of my week is probably seeing this neo-Nazi getting rightfully punched in the face. I do not want to go as far as to endorse violence as the solution to our political problems, but I do want to call into questions the  attitude that delegitimize and primitivize the use of force by certain protesting individuals/ groups.

Violence (and in theory perhaps death) for me signifies the peak of non-conformity, the ultimate refusal to be subjected to the state apparatus. I will not result to violence, because and only because I am too docile. I am still privileged enough to thrive under this society. My body is still rendered significance. My voice is still listened to. My writing is still read. But what about the disenfranchised? So disenfranchised that the only method for them to be included in the discourse is violence?!?! What else can they do in this oppressive status quo that has been honing its sophisticated technology of power for centuries? And by they, I don’t just refer to the sporadic contemporary violent efforts that have been vehemently criminalized but also my ancestors, my predecessors who had fought so hard with their fists in order for me to be here to benefit from their blood. Delegitimizing violence is delegitimizing their legacy, is domesticating their history, is betraying their radicalism by buying into the illusion of peace and humanity.

I am risking glamorizing violence, but it is a risk that is worth taking considering how myopic and domesticated mainstream activism has been (until the Black Lives Matter movement perhaps). I don’t fistfight because I can’t and I do resent myself for that. But I dance. I write. I push. And more importantly, I don’t stop other people from fighting.

One thought on “On protest, change and violence – Why I marched?”