For those who do not know already, I have been spending the past month in Vienna Austria, fully immersing in Impulstanz Dance Festival, dancing/ watching dances/ talking about dances fifteen hours a day, seven days a week. A contemporary dance festival that is unmatched in its scale globally, Impulstanz prides itself in its progressivity and its risk-taking quality even when it is situated in the middle of the largely conservative and homogeneously white Vienna. Nevertheless, as it is slowly and painfully becoming aware of its awkward racial dynamics, Impulstanz unfortunately chooses to launch a lot of “inclusive” initiatives to bring in a more diverse population, which stops short at merely showing good intention, without rigorously interrogate the underlying colonial logic of these decisions that are inherently exclusive within this uncritical inclusivity.  As an emerging choreographer and scholar who situates himself within the queer and post-colonial movement, it has been quite an exhausting experience to have to constantly push through my urge to walk out of every workshop and performance that is either blatantly racist or just foolishly oblivious to the whiteness in the space. Because if I were to walk out every single time something racially problematic is said or done, what is to be left of the festival?

I tell myself that I am in a predominantly white country, therefore, I should expect whiteness. I tell myself that I have built a relatively thick skin dealing with racial profiling, racist remarks and countless subtle Western assimilationist/colonialist efforts, so I can just brush these things aside to enjoy what I am experiencing in the festival. And I thoroughly did enjoy it, because having been navigating through different global elite institutions, I know how to internally pretend that I am white/colorless, that I am just like any other participants and that I do not see colors. But then I also have to ask myself why it is mutually exclusive to both savor every moment I have at Impulstanz and openly critique its structural racism at the same time. Why should I be complacent with whiteness just because I am in Europe, especially when they claim to represent this huge category of “contemporary dance”, which in theory cuts through geographical and racial differences because of its segmentation base on time,  and when they are benefitting enormously off the cultural capitals of non-white population (i.e. what they call here “urban division”)? How can I accept this racial status quo when one of my friends Shika was illegally detained by the police and was treated as a terrorist just because he is black, Egyptian and holds the name Mohamed? (You can follow the detail of this incident here)

I cannot hold back my anger whenever I think about what happened to Shika, and about the lack of concrete response from Impulstanz regarding this major racist incident. By failing to stand up for a guest artist that they bring in to attend this festival, Impulstanz is treating it as if this is an isolated singular event, ignoring the larger racial structural injustice that this institution is situated within and is complicit of, affecting all of the non-white participants in one way or another, irregardless of whether or not it reaches the degree of extreme violence in Shika’s case. Juxtaposing this with one of the festival’s flyer which glorifies and pokes fun at the image of a policeman commanding workshop go-ers to “stop wishing and start moving”, I can’t help but wonder if the people involved in the process of designing and selecting this image still find it cute and funny. 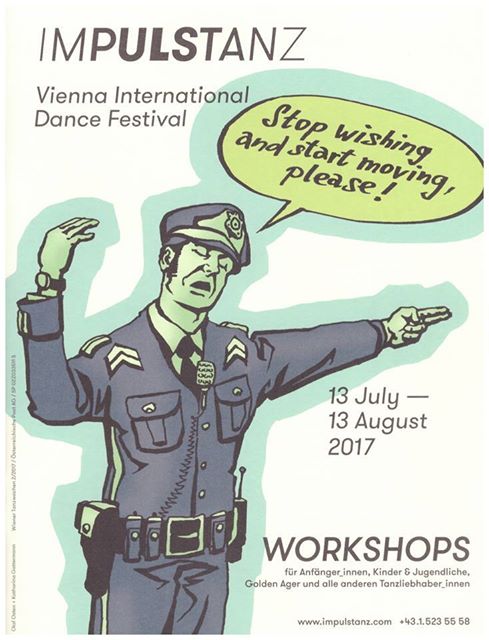 Another outrageous racist incident occurred to the artist Fannie Sosa, who was blatantly cornered and disempowered by the workshop organizers trying to dictate the terms of her work, as if they want the extra vibrant “color” that she, a Black queer femme, would bring to the festival, but not the shades the come  with it, the trauma that she carries on with her after working with white institutions like Impulstanz (the detail of which can be found on her public Facebook post). Notably, when Fannie Sosa insisted on holding a workshop exclusively to Queer Trans People of Color (QTPOC), she was met with a post-racial post-colonial rhetoric on how that goes against their “inclusive policy”, completely unaware how inclusivity is an euphemism for assimilation, for only co-opting the very few marginalized who are capable of performing whiteness and are comfortable doing so. And of course, when Sosa decided that she had had enough and cancelled her workshops, the main workshop organizer Rio Rutzinger had the nerve to call that high-stake political move  “uninteresting”, listing the tokenizing events/performances curated specifically for (very white) queers that Sosa would have missed, as if saying “we put on all these queer things for you already, why are you still complaining about race?” (If you want to support Fannie Sosa to still get paid by the festival, please sign the petition following this link).

A response from Rio Rutzinger when Fannie Sosa cancelled her workshop. Image taken from the artist’s Facebook.

Above are just two incidents that more or less exploded among the intensive festival participants (yet remains more or less covered up among the more regular and casual ones), but what I am particularly interested in is explicating is the covert engine of structural racism that drives Impulstanz hitherto, rendering whiteness the norm in “contemporary dance” through the curation of its workshops, performances and smaller events throughout. They are the backdrop of why Shika and Fannie Sosa were treated in such a violent way, situating these supposedly isolated events in a much larger colonial context with which Impulstanz is an accomplice.

In an exchange with Fannie Sosa that is cited above, Rio Rutzinger proudly states that 35 out of 180 teachers in the festival are PoC, and yet he purposefully or not ignores the fact that the majority these teachers are categorized under the label “urban”, showing that these forms are not “contemporary” enough for them, but for diversity sake they would throw a few tokens for these teachers anyway. Logically, PoC teachers would teach workshops like Hip-hop, Vogue, Waacking, Afro-fusion, Bollywood, Indo-contemporary dance but when it comes to contemporary experimental workshops, which are often deemed as more conceptual, more “high art”, they are still pretty much dominated by white people. If it is so hard to find non-white teachers in contemporary dance, is “contemporary dance” an exclusively white phenomenon then? That is not to mention the irresponsibility when it comes to the curation of these “urban” workshops, as they have the audacity to invite Cecilia Bengolea, a white (passing?) woman, to teach Jamaican Dancehall, something she clearly demonstrates no expertise in since she hasn’t even figured out how to move to the beat of the music yet.

The same woman who steals the opportunity from another more deserving dancehall teacher has the audacity to bring that form on stage in a “cultural balancing” act, which was only awkward and embarrassing, but also plainly naive in its perpetuation of colonization, following this modernist fascination with the “exotic” and “primitive” Other. I have already devoted a full article to that outrageous performance, but here I want to highlight how normative it is in Impulstanz for white choreographers to liberally appropriate from other cultures since this is in no way an unusual phenomenon. From one night to another, one choreographer to the next, there is no discrimination as to where they are going to take from: Jamaican Dancehall, Middle Eastern fashion/music/aesthetic, Indian ancient ritual, Vogue/Ballroom – there is some real diversity here! I am not an opponent of cultural appropriation exactly – in fact, I believe that is how culture fundamentally works – but the lack of rigor in interrogating who gets to appropriate what, where, for whom and how is just appalling. I guess uncritical inclusivity and equality is the way to go when white people are trying to deal with remnants of colonization – let’s pretend slavery and colonization never happen so that we can live in our post-racial utopia that is built upon whiteness, where a white man can openly scream “You Chinese little cunt” four times on stage without any consequences!

What is the best way to promote inclusivity and diversity when they are so uncomfortable to bring any non-white radical performances on stage, then? Of course, we have to organize a dance battle!!! It is the place where we can all come together, and celebrate all forms of dance so that we can appreciate the diversity of people we have here in Impulstanz! Well, here it goes, inclusivity strikes again… Let’s appropriate a black structure, devised and born out of blackness as a resistance and survival practice, so that we can all have some fun. Little were the organizers aware of what an absurd scene it was, when it became a situation where mostly people of color are battling against each other (especially in the later rounds) while the predominantly white audience is sitting around cheering and whistling. Is it supposed to be a zoo where non-white folks are just objects of entertainment for white people?

I do not wish to continue writing this article any more because there is no way I can list all of the racially problematic things on both macro- and micro- level that I have been able to observe, and it is exhausting to have to continually do this kind of endless work. Moreover, as a defense mechanism, I do not wish to wallow myself in this racial mess any longer so that I can allow myself to leave the festival with all the inspiration that my teachers and my peers have given to me. What can I do moving on from here? To just forget about it and continue with my usual life rhythm?? Perhaps in the short run for my own sanity sake, but it is time the festival needed to hold itself accountable for its whiteness and its active colonial practice. I cannot provide any solutions to these problems, but the few concrete steps that they can do is to stop being so defensive and to publicly take a strong stance in support of Shika and Fannie Sosa, following up with their cases carefully and to pay the latter for her political and activist work for the festival. However, to be frank, as long as there are two white men basically curating everything from performances to workshops, I will continue to be skeptical towards any willingness from the institution to be aware of its own racism, let alone to take action and to confront it heads on.

13 thoughts on “Racism at Impulstanz”